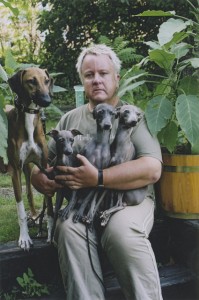 To begin with my family had German Shepherds. In 1979 I got my first own dog, a Newfoundland, and my interest in dog shows began. In the mid -80s I started with a couple of litters of American Cocker. The Cocker, however, wasn’t my breed. I was instantly charmed when I saw an advert from Kennel Prefix with a photo of some Chinese Crested Powder Puffs in a mini sofa. I bred the Crested for some years and it resulted in a couple of champions like Ch Py’s Lazer who at a big international show in Estonia went BIS-2. The step from Chinese to Italians wasn’t big as they have a lot in common with the sighthound like temperament. The natural choice was to start out with dogs from the world known kennel Sober. Since 1994 I’ve bred four champions, exported to the U.S., Norway, the U.K and to Russia. Naturally I’ve had great success with my Sober dogs as well, where Ch Sobers Bravissimo is in a class of his own with his WORLD CHAMPION 2000 titel. The aim, of course, is set on repeating that achivement!

My aim as a breeder is to breed correct Italians who fits just as well in the show ring as in the comfort of a nice sofa.

My interest in dogs would nerver have developed as it has if it hadn’t been for all the wonderful help and support from my mother Ulla and my father Per-Olof.